Get em’ Early or Get em’ Late!

Now that the fireworks have come and gone it’s time to get out and do some fishing. Since the last I’ve done several trips in between family vacations. Unfortunately, it seemed to rain for almost two weeks straight when I returned forcing me to reschedule some trips. A few days ago that all changed and we have now settled into our typical summer pattern and fishing again.

On my last trip before leaving town I fished with Marvin and his family from Texas. Conditions were perfect for running offshore and looking for mahi. It didn’t take long for us to locate the first weed line and it was game on. The entire family of four got in on the non stop action. Many of the fish were small schoolies and were release so that they could grow some more. On the same trip we also ran back over the wrecks to try our luck. We scored with a big jack creavalle, bonitos, mutton, and yellowtail snapper. The entire family headed back to Texas with a few fish tales under their belt. 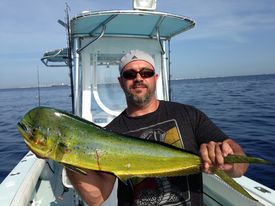 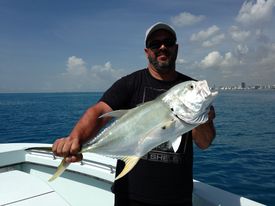 Since then I’ve done some late season tarpon trips and they've been pretty good. I don’t know how much longer the fish will hold but it has been pretty decent as of late with an average of 2-3 fish per trip and some nice permit mixed in. It’s always a great feeling when you’re able to put someone on their first silver king or permit. We’ve also enjoyed much cooler temperatures during the evening hours. 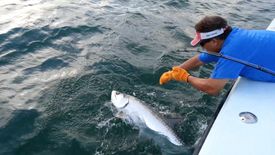 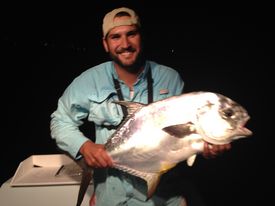 Speaking of temperatures, If you’re planning a fishing trip during the next month or two it’s very important that you take the hight temperature and humidity into consideration. Personally, I try to schedule trips early in the morning or in the late afternoon/evening whenever possible. I also make it a point to dress cool and drink plenty of water. A couple of years ago I learned this the hard way after retrieving an anchor that had snagged something near a wreck. All of the work under the hot sun left me feeling ill afterwards. Fortunately, I made a speedy recovery and was able to finish my trip without any problems.

Right now, the bite has slowed a bit on the reef during the day but is still quite active at night. I have some snapper fishing trips coming up where we’ll be targeting mangrove and yellowtail snapper. If you prefer to fish in the mornings there are still a fair amount of mahi offshore. Bonito are starting to show and will becoming thicker and thicker as summer progresses. Aggressive hard fighting bonito are a great way to introduce newbies to offshore light tackle fishing. Kids also have a blast catching them.

Well, that’s pretty much it for now. In the meantime you can keep up with all the actions via FACEBOOK (Nomad Fishing Charters), TWITTER, INSTAGRAM (nomadfishingchartes), or YOUTUBE. I have been uploading some videos that are both entertaining as well as educational and will be uploading for in the near future. If you’re ready to get out there and go fishing you can call, email, or text for more information.

Back to Main Fishing Report Page